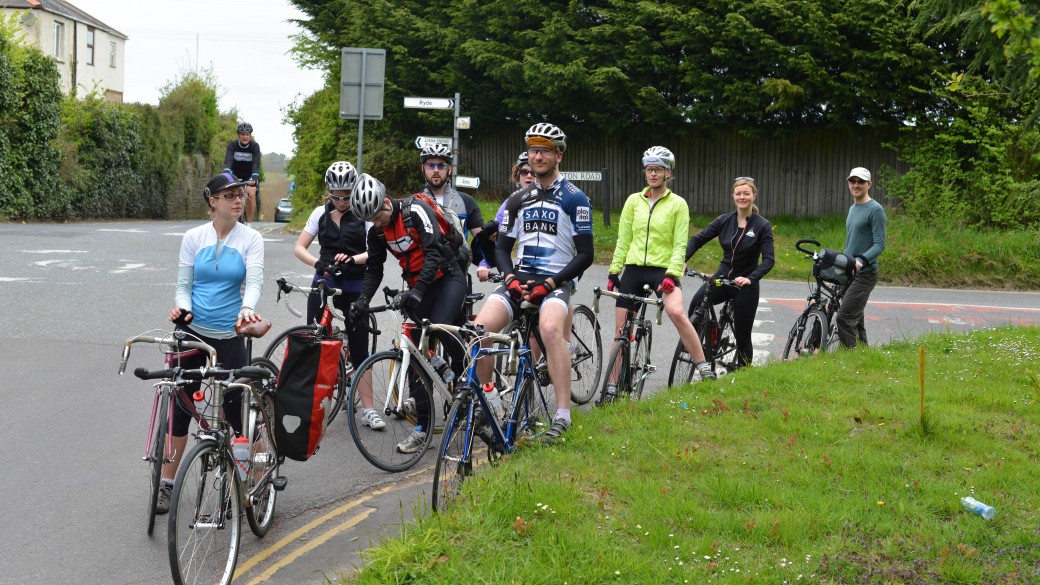 Ride highlight: The views of the coast

Ride low point: It felt slightly hurried and less enjoyable towards the end of the day

View Isle of Wight Randonnee in a larger map

The Isle of Wight Randonnee takes place over the long bank holiday weekend in May, roughly 2,000 cyclists descend on the island to take part. The ride takes place on the Sunday and we had signed up to do the 60 mile route that runs clockwise around the island. We caught the ferry on the Thursday night after finishing work and spent the weekend camping. The island is very beautiful and we spent a couple of days before the big ride exploring the local area.  We went for a short ride around the country lanes on the Friday which ended with a visit to a local pub where we discovered bar billiards – which is a lot of fun! Camping was great, although a little on the chilly side, and we even had our own yoga instructor (our friend Mark) who helped us to stretch out before the ride. The day of the cycle we started a little later than we probably should have and when we were setting off we met a fair few cyclists who had already ridden quite far! The ride was a lot of fun, the atmosphere was great and with so many cyclists there you really felt part of something big. It wasn’t a particularly fast ride, as with such a big group of us inevitably we ended up stopping pretty frequently, but it was relaxing and very scenic. The ride was mainly on small, quiet back roads which meant you could chat and cycle and we were often treated with spectacular sea views. The day seemed to fly by and we only had to climb a couple of exhausting hills. At the end of the day we celebrated us all completing the ride with a hearty pub dinner and a pint before cycling back to the campsite. The next day the weather was gorgeous and sunny and it felt good to be enjoying the last of our holiday relaxing on the beach before the long journey back to London.