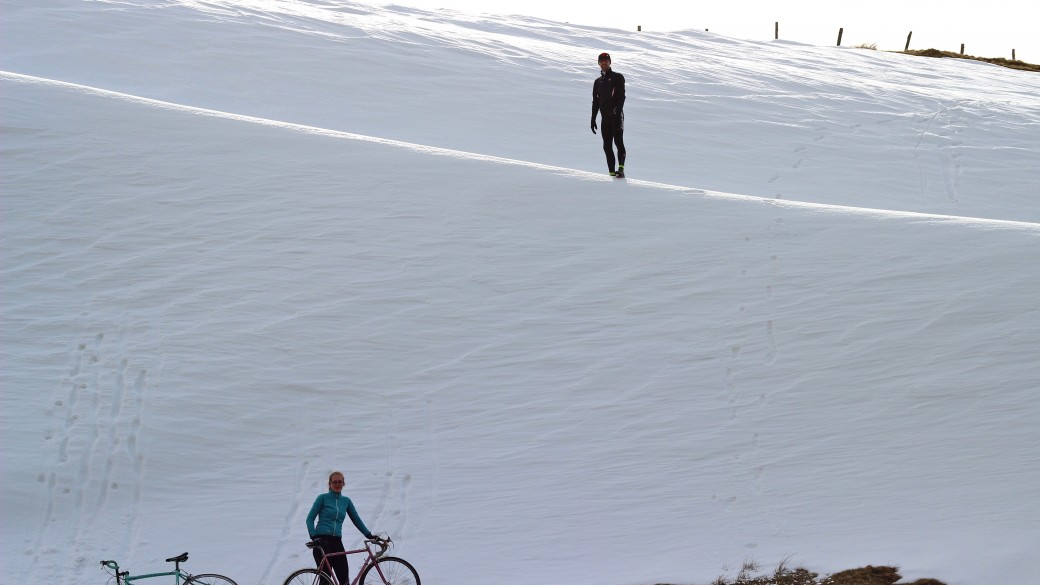 Ride highlight: The views from the top of the mountain/hill (felt like a mountain) and lunch at the pub

Ride low point: Hauling our bikes over a 30ft snowdrift

View The Lake District in a larger map

This is the first time I had ever been on a bike ride through snow and over ice! We left from our B&B with some friendly advice from the locals about a great pass over the mountain that we could take, they assured us it was now snow free! It was a pretty intense climb to the top of this pass and as we ascended the patches of ice covering the road got wider and longer! All three of us were riding road bikes with slick tyres which added to the fun of trying to stay upright on the ice. When we finally reached the top we were greeted with a giant snow drift which was completely blocked the road. It was approximately 20 – 25ft high (see the photo below) and the only options were to turn back, or to hike over  it carrying our bikes! So we did the sensible thing of course, and decided to hike up it lugging our bikes over our shoulders! Exhausted we eventually made it to the top and the view made the climb worth it. It was incredible!

The way down from the top of the pass was also quite tricky, the ice patches became more and more common and it turns out that riding road bikes over patches of ice and snow is quite a skill and one that I did not possess! After making it down and joining the main road again we realised we had covered hardly any miles and we had been cycling (or walking) all morning. The rest of the journey turned out to be a series of steep climbs followed by fun descents – which made for pretty tiring riding. We soon realised we were unlikely to make our original destination of Ambleside and so decided to settle for Coniston instead. Once we reached Coniston we headed for the nearest pub and enjoyed a well-deserved lunch and a pint. It was also a good chance to warm up with the only downside being the thought of the exhausting ride home again!