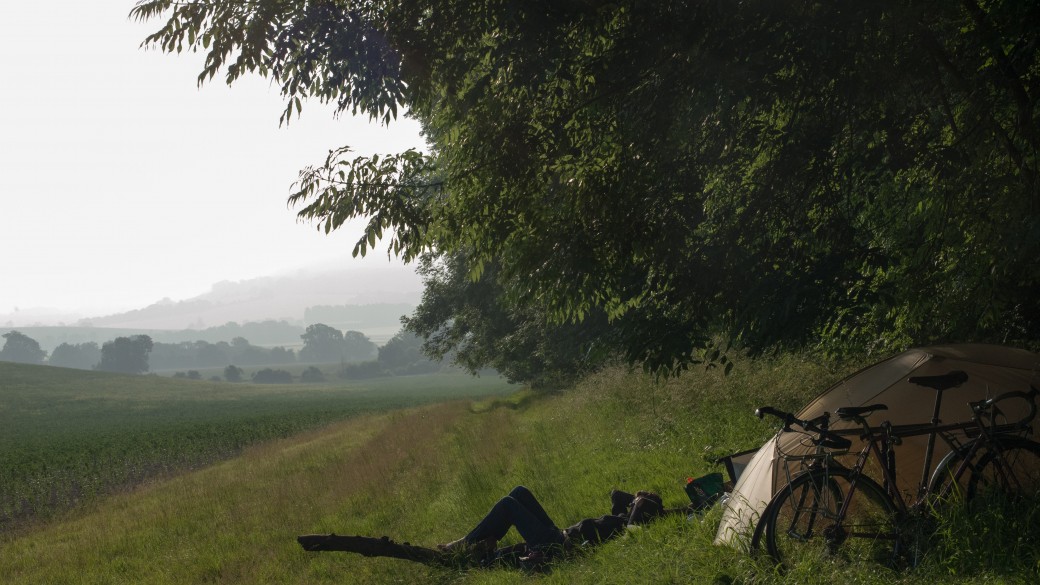 View Amberley to Crawley in a larger map

This trip was a pretty spur-of-the-moment one which we decided to plan after a few drinks in a sunny pub garden. We felt that we needed to make the most of this unusually warm weather as who knows how long it will last for, and so hatched a plan to escape London for the weekend.

We arrived quite late on the Friday night and cycled to a free campsite we had discovered near Amberley. The campsite had no amenities and was just a little patch of land that was hidden from the road by trees and shrubbery. It looked like it used to be a livestock shed and had a drinking trough, closed over well and an area that was covered with a tiled roof (see the photo below). It was a great place to stop for the night, with lots of wood nearby for a fire and even a bench to rest our weary legs. The village of Amberley is beautiful, very quaint and picturesque, but it didn’t take long to see the entire village and then after cycling approximately 3 miles we headed to a nearby pub for a well earned rest and a cider/beer of course. The pub had spectacular views over the Downs and we had lunch with some friends and then parted ways. After much debating about where to cycle this late in the day we decided upon Arundel to visit the cathedral and the castle. The cycle ride was short, about six miles but very hilly and it was now crazy hot. We arrived into Arundel very sweaty and thirsty, so found another very pretty pub situated by the wetlands and got yet more cider/beer. We decided it was probably best to call it a day with the cycling after an impressive 12 miles and try and find somewhere to camp for the night! This turned into an off-roading adventure through stinging nettles, cow fields and down steep muddy declines. However, the countryside was very stunning and the weather much cooler, so it was difficult to moan! We ended up finding a spot in a farmer’s field to wild camp in which was only a few short miles from where we had camped last night. We were a little nervous about wild camping but me having a slow flat and growing increasingly hangry helped with the decision to stop! The next morning André woke up super early at around 5, partly due to the heat and partly from fear that we would meet the farmer who’s land we were currently sleeping on! The spot we camped was very beautiful and apart from the faint noise of the nearby A-road, it was peaceful too. After breakfast we cycled east across the Downs and then North towards London, we had a good morning’s ride, covering a fair distance even though it was hot. The road’s were a little busy and not really wide enough but the countryside couldn’t have been nicer. We decided to stop for lunch at a lovely pub in Fulking before starting our stretch towards London, after lunch I realised that my patch job was not up to scratch and my tyre was flat again, blah! Once we got out of the South Downs national park, the ride wasn’t quite as nice, the traffic increased significantly and the beautiful rolling hills were replaced with the A23. We made it as far as Crawley before throwing in the towel and taking the train the rest of the way.