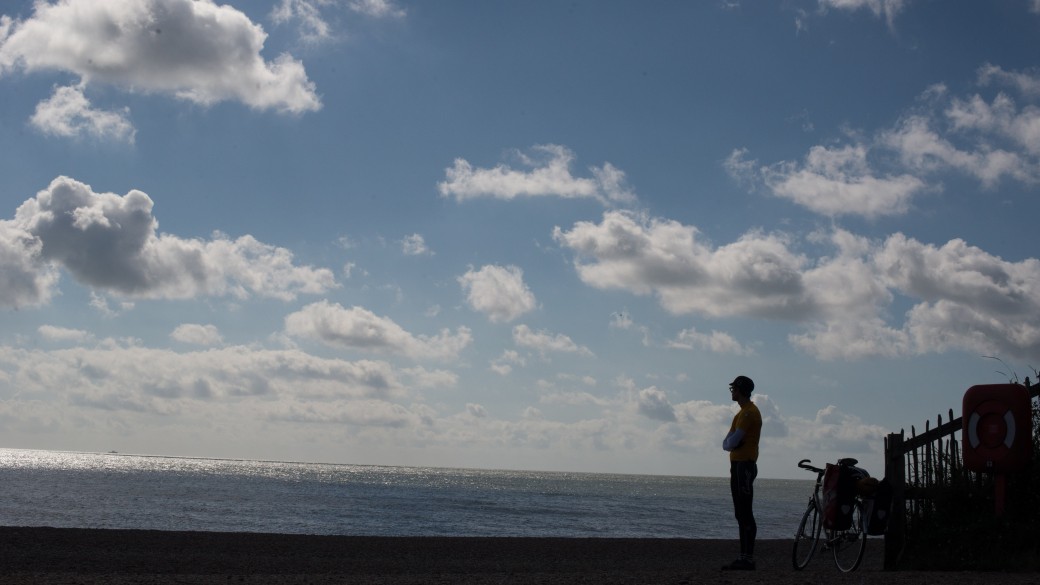 Ride highlight: Swimming in the sea at Southwold

Ride low point: No room on the ferry for us!

View Suffolk in a larger map

We took the train to Darsham after work on Friday night and wild camped in a forest near Dunwich. There was a beautiful sunset and the evening was lovely apart from the swarms of mosquitos! The next morning we cycled to Dunwich beach, it looked very different than the last time I was there, which was after completing the Dunwich Dynamo, it was quiet and calm and not filled with sweaty, exhausted cyclists! We spent the morning cycling north to Southwold, stopping off at a deli on route to get some delicious picnic food. Southwold was a very pretty little seaside town complete with colourful beach huts and fish and chip shops. The town was incredibly busy with tourists and so we cycled around briefly and then sat on the promenade overlooking the sea to eat  lunch. As the sun was shining I decided a quick swim was in order before we left. After lunch we started cycling south to Aldeburgh, it was a nice ride down small, quiet country lanes and the afternoon flew by. We found another wild campsite this time in some woods near Aldeburgh. André started to make a bonfire but decided against it as we were supposed to be stealth camping and also because the forest floor was covered with dry kindling! On the Sunday we continued to cycle south to Felixstowe. The cycle route was again very  nice, barely any traffic and good road surfaces, which made for a really enjoyable morning. We stopped at a park mid-morning and ate a huge breakfast, devouring a whole pack of bacon between the two of us. We arrived in Felixstowe by early afternoon and spent some time by the beach outside of the town. The town itself was pretty unremarkable and had an industrial feel to it. I went for another swim in the sea, partly to cool off and partly to wash away some of the weekend’s dirt and grime! In order to continue our journey further south we needed to take a ferry across the Orwell River. However, when the ferry arrived it was just a tiny little fishing boat which a group of guys had pre-booked meaning there was no room at all for us. After the ferry disappeared into the distance we discovered that the next one was in four hours time! By this point we were both slightly tired and fed up, so decided to take the train back from Felixstowe which cost us a pretty penny but felt worth it when we were comfortably speeding our way back towards London.