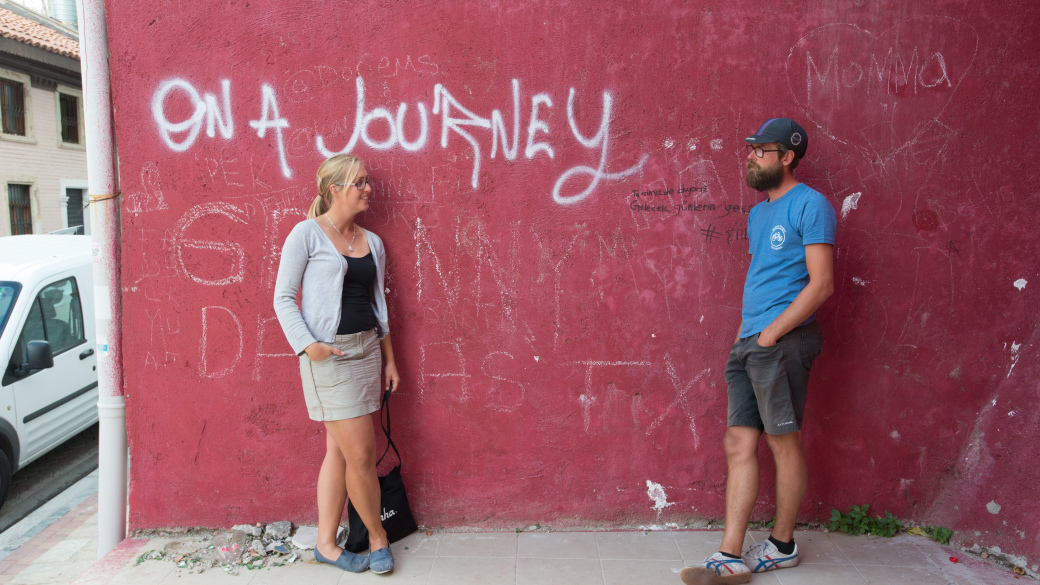 The questions we get asked the most often are actually fairly simple ones such as; ‘Where are you from?’, ‘How old are you?’, ‘How long have you been cycling?’, How far have you cycled?’ and in Asia slightly more strange ones like; ‘Where did you leave your children?’

However, over the past year we have also often been asked the same questions about how we decided to do a trip like this and what was involved in taking the plunge and doing it. So we have decided to post our most FAQ! Hopefully some of the answers might help anyone planning a big cycle tour.

If you have any other questions you would like us to answer, get in contact (add link to email) and we will do our best.

What did each of you do for a living before you left on your bike ride?

André is a civil engineer and was working for a consultancy in Central London. Claire studied psychology and was a research assistant within the Military Health Research department at Kings College London.

When did you first have the idea of cycling from London to Japan?

The idea started as a kind of joke. We had been on a few shorter cycle vacations, but we were always disappointed about how rushed they felt. We had also both had a strong desire to visit Japan, even before we met, and one day we just joked about cycling there. It was a crazy idea that quickly became more and more realistic.

When did it go from being just an idea, to something you started planning for? What inspired you to take the plunge?

It went from just an idea to a real plan after our last two-week ‘bike-cation’. The initial steps such as reading about places to visit, looking at ‘must visit’ locations in the world were pretty noncommittal. Then purchasing some gear was the first big step, after that we slowly started reading more about routes, places people have cycled, the long distances they covered and following other cycle tourers blogs, and it put us over the edge.

How long did it take you to save up enough money?

The thing about cycle touring is it’s really cheap. Transport is free, we usually wild camp or stay with people along the way who we meet or find on warmshowers or couchsurfing. So, nearly all our expenses are on food, and sadly fizzy drinks. It took us almost a year to save up enough money to travel for a year. That was the original plan, it turns out we think will be getting another 6 months out of our original budget.

Have you left your jobs permanently or will you be able to go back when you return?

André is able to return to his job. He is lucky enough to work for a company where they were supportive of the trip. Unfortunately, Claire was unable to stay on while taking such a long length of time off work.

Did you have any concerns before you embarked on the trip?

Sure we did, I think we both had concerns about whether we were making ‘the right’ decision, especially as many of our friends were purchasing houses, getting work promotions and making other big and more conventional life choices. But, after a year on the road we can both safely say that it is one of the best decisions we have ever made in our lives. We’ve had a chance to see so many amazing places and meet wonderful people. It has truly been an experience of a lifetime.

How did you decide what route you would take?

The route was actually a fairly easy decision to make. We mainly moulded it around places where we both had never been to and places we both had a desire to see. Eastern Europe, Central Asia, SE Asia etc…. However, it hasn’t all gone exactly to plan. We had originally wanted to visit Iran. Sadly due to a change in visa regulations we were not able to. However, every change in our route has led to new adventures in really interesting places. Georgia, Azerbaijan, United Arab Emirates and Oman were a few countries that were not originally part of the plan but have ended up being some of the most interesting places we have cycled through.

What did you pack to take with you? Was it difficult to travel light when going away for so long?

We packed far too much and anyone planning a bike trip should definitely learn from our mistakes! It was incredibly hard to pack light for such a long trip with such diverse weather conditions. The basic breakdown is: Sleeping gear, cooking gear, bike spares and tools, first aid kit, cycle clothing, clothes for off the bike. Our luxury item which is a little unnecessary is a laptop each – we know is a little ridiculous but when we are stopped in one place for a while and both want to write our blog, email people, do internet research etc. We also have wet weather gear, a water filter pump – which has been essential in India, Nepal and Myanmar, our iphones for navigation and we also both have a camera. Things, which we did not need and over packed, include: too many clothes – you really don’t end up wearing that many items.

For a really detailed list of our equipment you can visit our ‘Big Ride; Gear List’. It is a little out of date as we created it before we left but it is very comprehensive. We have also reviewed a lot of our equipment and wrote a short article titled ’12 items you may not think about bringing on a bicycle tour’.

Is there such a thing as a ‘typical day’ for you? If so, could you describe it?

Our ‘typical day’ on this trip consists of breaking down our campsite (packing away our bedding and the tent,) making breakfast. We then cycle for a few hours taking short rest breaks before taking a more substantial break for lunch, we then cycle for a few more hours before finding a wild camp spot, set up the tent and beds, make dinner (often pasta or rice) whilst listening to some music or a podcast, clean up, clean ourselves if possible, and then crawl into bed to read or watch a film before sleeping and then repeat! However, our ‘typical day’ changes a lot depending on the country, hours of sunlight and weather.

What are some of your fondest memories?

We have slept in some strange places including, gas stations, mosques, churches, gurudwaras, hospitals, schools, animal sheds, local’s homes, forests, deserts, jungles and everywhere in between, and every one has been an experience to remember.

Besides the big sights such as the Taj Mahal in India, Effuses in Turkey, the Wieliczka salt mine in Poland, and other well-known sights. We have seen some other gems along the way which are off the beaten track, beautiful monasteries, ancient underground cities in Turkey, mysterious burial mounds and old Portugese forts in Oman, wild landscapes and spectacular fortified churches in Romania to name but a few.

But the most spectacular moments are those few seconds on the road where you are in a picturesque landscape with no-one around. It’s just you on your bike in the wild.

Great to read! It must be so amazing I also enjoyed reading all about BurmaI, thank you for that. I am very excited and not so anxious about it after reading your journey. I have past on the picture of the sandels, they look just perfect! and great tips. I have some serious adjustments to make as my moto used to be “I can do without the essentials, but must have the luxuries!” I can see I have to embrace a new outlook lol. Oh I did my first 100 miles on Wednesday. I cyclef with the ladies cycling club that I belong to, we cycled to Dymchurch and back. It’s a milestone for me. Ok stay safe and keep posting. Xxx. PS you missed a great wedding in Saturday !

Hey Carole, A 100 mile ride is really impressive, good on you! We rarely cycle that distance in one day! As for your outlook I bet you will be surprised by how little you miss the luxuries and then when you do get them – wow do they feel great! I am excited for you and have no doubt you will love Burma and then you will be cycle touring all over the place – it is a bug! Take care.

This site is amazing, thank you so much. I am planning the exact same trip – well, the UK to Japan part. Not entirely sure of the route and liking the look of yours.

One of the many things I am intrigued by is visas. What did you do about visas once you’d left Europe? Do you go to Embassies of the country you are in to obtain visa for the next destination?

Be great to hear back from you.