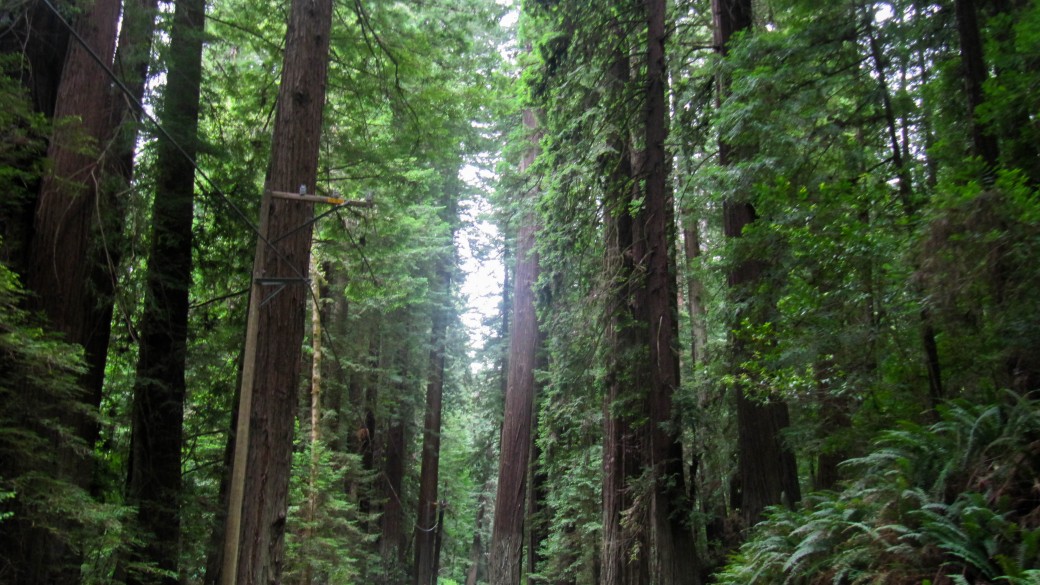 Punctures: 15! We made a huge mistake when fixing the original flat tyre and ended up with numerous ‘snake bites’

Ride highlights: The Oregon coastline, the Redwoods and the Avenue of Giants, cycling over the Golden Gate Bridge

Ride low points: The continual, almost daily punctures, the cold nights, breaking the tent on the second night and falling over too often because I was not used to clip in shoes!

View Portland to San Francisco in a larger map

We flew to Seattle/Tacoma airport and then hired a car to take us to Portland where we planned to start our ride. Cycling out of Portland was a particularly brutal way to start our tour, the climb out of the city was approximately 1000ft. Our sleeping plans were a mixture of wild camping and staying at hiker/biker campsites along the way. These hiker/biker campsites were great, they were often in beautiful locations, you didn’t need to book in advance you could just rock up, they were roughly $5 per person per night and you had a quiet spot away from the rest of the campsite surrounded by other cyclists or hikers. I wish they offered this option more in the UK and Europe. From Portland we cycled through Tillamook State Forest and on the descent out of the forest we spotted the Pacific for the first time which would be our trusty companion for the next two weeks. On day four of the trip I got a puncture from a giant nail in the road (see photo!) it was a nightmare to fix and little did we know this puncture repair would cause us grief for the next week or so! We failed to pump the tyre up enough after fixing the flat and because my bike was not really a touring bike and had too much weight on the back I repeatedly got pinch flats (snake bites), these peaked at about 3 or 4 a day at one point! We had not encountered this problem before and thought (rather stupidly in hindsight) that the tyre needed to be softer not harder! Having to take all the panniers off and fix a flat on the side of the road several times a day was demoralising and exhausting. Eventually some guys in a bike shop told us where we were going wrong and that was the end of the punctures! Cycling along the Pacific coastline in Southern Oregon was awesome, rugged coastline in both directions as far as the eye can see and dotted with little lighthouses, seals and sea lions and great beaches. Oregon was quite a damp state it seemed and pretty cold, I had to buy a fleece lined sweater from Walmart (my least favourite place) to help me cope with the cold evenings. Therefore  I was excited to cross the border into California, as after spending my teenage years watching the O.C. I was led to believe that it was always hot and sunny in California – it turns out this was a lie! On our first day riding in California we noticed that the trees were starting to get bigger, we were cycling through mini-redwoods. We spent the night camping at Elk Prairie campsite which was located in a beautiful park, and which not that surprisingly had lots of elk, it was a great place to wake up on my birthday! The Avenue of Giants (a long road that runs right through the Redwoods) is one of my favourite places I have ever cycled. It was an incredible experience and very difficult to put into words, we were just in awe of these magnificent trees and cycled very slowly down the avenue taking it in. Camping amongst the Redwoods was also pretty great and a unique place to sleep. The next morning we met up with an old friend who saved us from the torrential rain by giving us a lift in his VW campervan! For one day our cycle tour has turned into a road trip! Neither of us mind too much as we could do with a day off from cycling. We make lots of stops along the way to visit the tourist sites, we drive through a Redwood (and only just make it) and explore  a house made from one Redwood log. We also stop off at the beach plenty too and even get up close and personal to a seal and take a dip in the freezing ocean! Our opinion is that the campsites in California are not as nice or well-equipped as the ones in Oregon, however they are nice enough. We woke up and took a shower leaving the food unattended for a very short time during this period a gang of Blue Jays attacked André’s pie with dire consequences – they pecked a hole through the plastic packaging and took a chunk out of the pie. It turns out Blue Jays love pineapple pie! Glimpsing San Francisco and Alcatraz for the first time from across the bay at Sausalito was a really great moment. The day before we had discovered that the Golden Gate National Recreation Area (which is a park situated on a hill across the bay from San Francisco) offers limited camping for free! It books up quickly as they have so few spots but you can book in advance and we would really recommend it. We had to climb a lot of hills to get to our secret campsite but once there it was amazing, very secluded and with lots of wildlife around. We had some spectacular views of the Golden Gate Bridge which were even more impressive once it got dark. The next morning we got to cycle over the Golden Gate Bridge, it was a little foggy and there were a lot of pedestrians which made it a little difficult at times but even so it was great. Once we reached San Francisco, the rest of our trip was spent exploring the city. We enjoyed great coffee, a food truck festival with delicious Korean BBQ and ice cream, the parks, the Crooked Street – which we cycled down, and Japan town. We purchased a map of the city from Kickstarter a few weeks before the trip. It is printed on waterproof, tear-proof tyvek and  it boasts of showing you all the hidden gems of the city, in our opinion it is worth buying as we visited quite a few of the places. You can buy the map HERE. Our favourite places on the map was a Japanese hardware store selling interesting bits and pieces and a Chinese restaurant called Z&Y, where we had a delicious spicy szechuan meal, the place is always rammed especially after Barack Obama visited it. Fantastic two weeks and San Francisco we will miss you!

I did the same tour. By reading your report I got the emotions back cycling the Golden Gate!